NOVEMBER 2018: New update for Sims 4 patch 1.47.49.1020. Newborns and adoptees are now affected, though the magic won't work on adoptees until they're brought home.

A quick and dirty mod that randomly applies custom gender traits to NPCs who haven't already had the defaults applied to them. Most (all?) premade sims in a new game and any new townies should be eligible.

Ordinarily, when a sim is loaded during gameplay, they are given a set of gender traits (masculine frame for males, feminine frame for females, etc.) if none have already been assigned to them. This mod allows the game to vary those traits. A male sim might be able to get pregnant, a female sim might prefer masculine clothing.

The included .json file isn't strictly required, but I recommend you customise its values to your liking before running the game with this mod. A new file with default values will be generated if it's missing or invalid.

You must have script mods enabled for this to run.

Editing cosmic_gender_ray_settings.json allows you to adjust the probability a trait will be picked for male and female sims. There's no in-game settings menu, sorry!

As an example, under female_sim:

will give most (but not all) female sims a feminine clothing preference.

If you're unsure your syntax is correct, you can run the contents of your file through JSONLint. 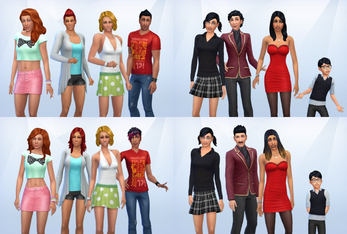